Marla Rio has a passion for taking care of others combined with a profound love and interest in healthy food and nutrition. She has an Associates degree in Early Education and a Bachelors degree in Social work.

Marla has traveled the world visiting India, Mexico, Nicaragua, Africa and several other countries. On her travels she has been a volunteer and has learned and grown from these experiences.

Earlier, she lived in Burlington, VT working as a preschool teacher at a progressive school for 5 years. During this time, she enjoyed spending time with the community and in nature with children, gardening and exploring.

About 7 years ago, Marla began her journey with eating a more plant-based diet and it changed her whole relationship with food. It excited her whole being! While living in California, she decided to immerse herself into this lifestyle as well as learn more about it by experimenting on herself. Marla eliminated refined sugar, meat, dairy, eggs; the things that she thought she couldn’t live without. Through this experience, Marla found that she had more energy than ever before, lost weight, had more mental clarity, and her skin began to clear up. Marla felt grounded and happier, and more alive than she had felt in a long time.

This led her to experimenting in the kitchen, and she began making smoothies and juices. Raw food changed her life dramatically and for the better. 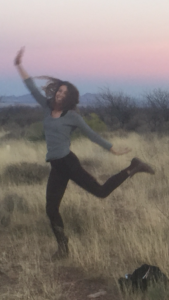 Marla began waking up early to do pilates, yoga, hiking and practicing meditation. She became more focused and saw the world differently in a more positive light, holding more beauty.

After caring for someone with cancer, Marla decided to learn more about raw food and how to prepare it. While visiting her mother on her land in Arizona, Marla discovered Gabriel Cousens, Tree of Life Wellness Center in Patagonia, AZ. There she prepared raw food for guests with diabetes and learned just how powerful a medicine food can be. It truly helps to regain balance in the person and to heal and transform the body, mind, and spirit.

Marla’s journey into the world of colonics started a few years ago when she became constipated for the first time in her life after losing someone very close to her. She realized then that she was holding on to the emotional stress in her gut. Marla couldn’t let go, both physically and emotionally. She got her first colonic, and realized that she needed a series of sessions to clean out!  After her series of colonics, Marla felt like a whole new person! She was no longer sluggish and irritable, and felt like she could just float down the street! Marla felt light and so energetic. After experiencing the transformative power of colonics, and maintaining a healthy colon, Marla knew this was something she wanted to share with others. This experience has led her to do this work as a Colon Hydro-therapist and to help others feel better.

Donna's Blog: 7 Reasons To Get A Colonic!

GIFT CERTIFICATES ARE AVAILABLE! CALL TO PAY BY PHONE OR STOP BY!

Gabby Bernstein Recommends GEV For A IF Sauna Session! Read Her Blog Post!

"The service is excellent! The atmosphere is very relaxing and welcoming! I am so happy I came across Gravity East!!!!"

"Donna is the best colonic giver. She makes a slightly uncomfortable thing, comfortable. She uses a Gravity system which is Soo much better than machines..."

"LOVE, LOVE, LOVE Gravity East Village. Cynthia is great and really helping me on my way to achieve optimal health."